The Anatomy of a Hole

Normal metal stamping processes involve driving a sharpened tool-steel punch through the sheet or strip material and into a die cavity where the slug or scrap is ejected. Cutting clearances between the punch and die are closely defined and specified. The process produces a very predictable edge condition on the finished part. Basically, the punch starts out by trying to compress the material, producing a rolled or radiused top edge. As the sharp punch begins to cut through, it shears the material, producing a straight, burnished wall, usually between 1/4 to 1/3 through. As forces build up beyond the strength of the material it yields, breaking away in a line between the punch and die edges leaving a burr around the bottom edge.

Burrs, like parting lines in plastics or flash on castings, are normal by-products of the metal stamping process. Blanking burrs are usually somewhat ragged, uneven, and sharp. They can vary in height as punch and die edges become dull, but generally up to 10% of material thickness can be expected. Burrs can be dulled or removed by mass finishing processes or secondary operations, depending on the application.

Since punch and die clearances are normally around 8% to 10% of material thickness per side, the bottom portion of the hole or trim is tapered the amount of die clearance. Inside dimensions are normally measured at the shear, or smallest portion, disregarding the breakaway. Outside dimensions are measured at the shear or largest portion, with the breakaway tapering smaller. If this breakaway cannot be tolerated in a particular application, a hole or outside edge feature can be re-trimmed or “shaved” to produce a straight edge. This must be specified, and will require an additional step or secondary operation. Normal piercing and blanking operations are extremely repeatable and very close tolerances can be expected. Size tolerances of .002” can be held in most applications.

In most cases, holes pierced in a flat blank part can be done in the same operation, and location from hole to hole is repeatable within a close tolerance, usually +/-.002”. The only exception is when holes are closely spaced (<1-1/2 X material thickness) and must be pierced in separate stations or operations. Gauging or feed accuracy will require more liberal tolerances. Holes pierced on different planes, as in a part with an offset form, must allow for added variables of bend tolerances and material springback.

The same compressive forces exerted on the material are shared by the tooling. A 1/2” diameter punch perforating .062 thick mild steel will require 2-1/2 tons of pressure behind it to push through. At 80 parts per minute this places extreme impact forces on the body of that punch. Punch tooling can fail catastrophically if there is not enough cross-section area to support this force. To alleviate this condition it is best to design perforations with a cross-section or diameter equal to material thickness at a minimum.

Most metal forming is a linear process. The work of perforating, forming and blanking is done by the up and down movement of press equipment. Amazingly complex shapes can be generated using this process, but a good metal stamping design will take the process and material into consideration.

As a general rule, the lower the alloy and temper, the more formable the material. Tempers are rated in terms of how tightly they will bend without cracking and whether with the grain or across. The harder a material is, the more it will “spring back” when formed. Extra work or over-bend must be induced to achieve a specified angle. Generally, anything up to 90 degrees can be done in one operation. Beyond that, a little more creativity may be needed. Forming in this manner requires that a “leg” of material to be pushed or wiped up into position while the base material is held flat. For that reason, the length of a formed leg should be at least 2-1/2 times the material thickness beyond a bend radius.

On thicker materials and bends with relatively small inside bend radii (2 X material or less), there can be some overall thinning of material through the bend. Because material is compressed on the inside of the bend, the excess gets forced out either end of the bend radius, creating what is called bend bulges. If they are not acceptable, the blank must be contoured to compensate. A note such as “Bulging not allowed in this area” should be added to the part drawing.

For the same reason, when two adjacent sides are folded up, as in forming a box, some relief is needed at the base of the bend to avoid “pinched” corners. Usually, this would be in the form of a round hole placed at the convergence point of the sides.

Formed features are subject to a number of variables, including material thickness and temper tolerances, angular tolerances on bends, and station-to-station inaccuracies in the process. Dimensions should always be given to the inside of the formed feature. Angular tolerances of +/- 1 degree or so should be allowed on bends of any angle. For this reason, tolerancing of features placed at the outer end of a form should take the angular tolerance of the bend and the distance from the bend into consideration. Where a feature has multiple bends, tolerance stack-up should be analyzed and allowed for. Where tolerances need to be tightly held, an additional qualifying operation may be required to meet this specification. 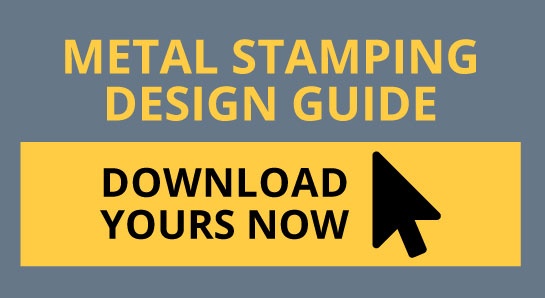